Home » How to Reduce Data Usage on Facebook App
Apps

In this article, I will guide you with several tips and tricks on how to reduce data usage on Facebook app. I run a mobile phone comparison site. I’ve worked for 15 years in telco, mostly in data Product Management roles and Digital Strategy positions. Over the last year or so, I’ve written a number of articles for my own site and others relating to the trends which are becoming evident in the use of mobile data.

To sum up, the most common thing people need to know about the amount of data they’re using in their plan: It’s increasing a rapid rate. The average data bundle people buy on our website has doubled in the last 12 months and is now in the region of 6GB. The analysis We’ve done suggests that Facebook account for between one third and one-quarter of most people’s data consumption.

Facebook uses between 25% and 33% of all your mobile data

The success of Facebook means the app, service, and phenomenon, Facebook is all 3, is surrounded by hype, statistics, and strong emotions. Facebook as a service (in a very different form to what it is now) was only launched in 2004. However, for most of us, it feels like it has been around forever, a part of our lives that we now take for granted.

If you’re on this page, you are obviously aware of the importance that Facebook has in determining the amount of data you get through each month. Rest assured, there are some simple things you can do now which will enormously reduce the impact Facebook has on your usage.

The different types of data use – Wi-Fi vs cellular

Before we get into this, it’s worth considering the different types of data there are. Not all data costs are created equal. Some types of mobile data usage are cheaper than others.

The primary reason Facebook uses so much data is that It’s just so incredibly popular. Official statistics say that the average user checks Facebook 8 times a day. I worked at a large bank about 18 months ago and met the head of Facebook in Sydney Australia. He told us that the average engaged user triggers the service – that is opens the app – 17 times per day. The average number (8) visits a day is drawn down by a proportion of users who rarely access the site, perhaps checking in one a week or once a month. In a world where the proportion of apps actually used is dropping dramatically, Facebook is an evergreen service we can’t get enough of.

Considering the cellular data usage associated with this sort of frequent access then, the important number to remember is 2-2.5Gb per month. That’s how much cellular data the average Facebook user gets through a month. As I said in the introduction, we recently studied the average data bundle people were buying through our site and observing its rapid growth. In late 2017, the mean data bundle purchased was 6GB. That means Facebook accounts for between one quarter and one-third of your monthly cellular data usage. As you can see from the screenshot below, Facebook, for most users, whether Apple or Android fans, is usually one of, if not the top apps in terms of ranked data usage. 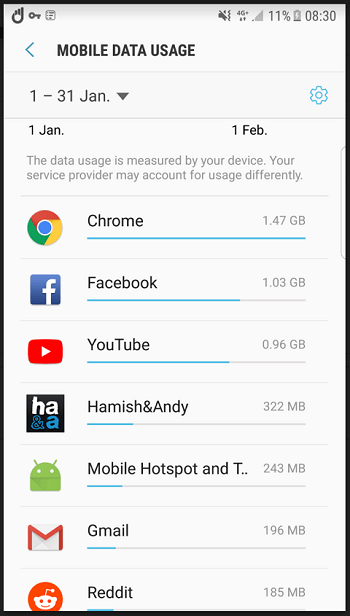 Remember, Facebook’s algorithm is constantly tweaked to keep you using it. Facebook’s success and ability to generate money depends on it.

Most of the data Facebook Gets Through Is Auto-Played Video

Whenever you want to find out why an app or service is using a lot of data, you need to consider the video involved. The video is the single largest driver of mobile data consumption and the fastest growing component of any usage. Here’s what Cisco has to say on the subject. (See chart.)

It doesn’t take long to get from that to the reason Facebook uses so much data. Facebook turned on automatic video streaming in December 2013 for both desktop and mobile versions of their app. Such is its success that other video platforms are now investigating the same thing including YouTube and Twitter. The video is an interesting problem for Facebook. Users say they don’t like it – although the analytics seems to indicate they will at least tolerate it.

Any Facebook feature which changes causes a stir. It’s just not possible to keep a customer base of so many billions all happy, all of the time. One of the main changes Facebook implemented, which has influenced user satisfaction and impacted the amount of data that are used by the app was the December 2013-2015 turning on of auto-play videos in the Facebook News Stream.


The reasons they implemented this significant change have never been made public. The effects of it clearly are very obvious – we each experience. The suspicion many have is that a large part of the decision was to facilitate the launch of video adverts on the platform. Based on strong feedback, Facebook no longer play the audio automatically, the user has to engage with the video for it to play sound.

How to Reduce Facebook data usage on the Apple iPhone

Limit your own access: As we’ve seen, the major factor driving the data Facebook uses is its position as one of the most popular apps that people use. Users spend somewhere between 45 minutes and one hour per day on Facebook, depending on the country being considered. If you want to reduce your data usage, just use it less. Equally effective is limiting your usage to Wi-Fi hotspots.

How to turn off Video AutoPlay in The Android Facebook App

These directions may look complicated but the experience of going in and turning auto streaming video is actually very easy. Like most of these things, it’s pretty intuitive on Android when you get started.

How to turn off Video AutoPlay on the iPhone Facebook App

Stopping auto-play videos on Facebook is a bigger challenge for iPhone users. Finding the option is hard but it is in there.

Facebook have inserted their own data reduction facility (only available on Android phones) into the app for the times you’re accessing the app on your mobile in cellular coverage. Using it will reduce the image sizes that are uploaded and downloaded to your phone from Facebook, over the internet. This setting automatically turns off video auto-play, the procedure for which we covered in the previous section.

There are a large number of apps out there designed to control your mobile data. They work first by making you more aware of how much data you have / how quickly you’re getting through it. After that, they constrain bandwidth heavy apps – like Facebook from doing things ‘in the background’.

Background activities which use a lot of data include automatic updates of App versions which uses a lot of data (the Facebook app currently stands at around 150MB whichever platform, iOS (Apple) or Android you’re using. Increments are only a part of that but Facebook now upgrades its service more than once a week – so these all add up.

Facebook has partnered with Onavo, a data manager app which is offered entirely independently of Facebook (that is, it won’t just reduce your data usage on the Facebook app, it will do the same things for all of your apps.) Facebook just makes it easy to find and clearly endorse its use by providing access to it through settings in their app. It’s free to use and has around 10 million users. They can’t all be wrong.

If you’ve got an Android, and your goal is to cut the cellular data you’re using, one option Android users have which iPhone users don’t (yet) is to install the ‘Facebook Lite’ app.

The Facebook Lite app is designed for those using low bandwidth connections. In developing nations, for example, 4G, data connections, even 3G can be hard to find. Facebook Lite will function on connections as low as 2G – GPRS – the sort of tech that was superseded in most developed countries 15 years ago. Obviously, it has to be more efficient at sending and receiving data to work over a connection that size. The service is in beta now although anyone can download it from the Google Play store. It will make it to iPhones at some point although Facebook has yet to confirm when that will be.

Facebook is now the world’s 4th most valuable brand, worth a staggering $4.7bn according to figures released at the end of 2017. It’s this success that has caused one of the most common problems there is with mobile phones. Facebook consumes data like few other apps. It’s likely to be at least up there with the apps which use the most data on your phone each month.

There is always going to be a battle between us and Facebook. They seek to engage us with content we find interesting, including videos and their concern that we are using too much data. They know video engages us and it’s their job to get us to use the service more. We seek to use less data.

Facebook uses a lot of data because we use it so much and largely due to the video people watch on it. We’ve also seen that some very simple steps, which can be undertaken by the uninitiated in time amounting to no more than 5 minutes, can significantly reduce the cellular data you use.

What’s interesting, is how aware Facebook is of the mobile data their service is getting through and the ramifications of that choice. There are no fewer than 3 different features in Facebook’s settings (on Android machines) designed to reduce the amount of mobile data you consume. Facebook themselves have information on how to limit the amount of data your phone uses. Apple users have it a bit harder with fewer facilities but installing a data management app and turning off video auto-stream will do around 90% of the good that any Android user can muster from the variety of data reduction facilities they have. Whichever platform you use for Facebook access, if you take a look at settings in the app, you will very quickly see that some simple tapping of the available options will reduce the data consumption.