“Mommy! Mom, mom, mom! What about this one?!” I circled my mom, tugging on her sleeves as I attempted to get her attention.

It was the middle of summer in the year of 2005, I had just turned seven years old and I had talked my parents into buying me a top rated backyard trampoline for my birthday. As we pulled into the Sam’s Club parking lot, I was already daydreaming about jumping on my brand new trampoline. I was the first one out of the car, dragging my parents through the door as fast as I could. As we came to the trampoline section in the store, my eyes were instantly drawn to one specific trampoline. Unlike the rest of the trampolines which were circular, this one was square.

My mother and father discussed prices, as well as the safety of each trampoline as I tried with all my power to get their attention. When I finally did, and my parents saw which trampoline I had picked, they looked at each other with a strange expression on their faces.

“It’s square,” my father stated looking at my mother.

My mother leaned down to my eye level saying, “Honey, are you sure you don’t want a normal circle shaped trampoline?”

“Yes, mommy! The square one is bigger!” I exclaimed.

This made them both laugh, which then, in turn, made me mad. I started pouting until my father realized the square trampoline I wanted was also on sale, which changed his mind fairly quick. Before long, my mother was on board and we were on our way home with a new square trampoline. 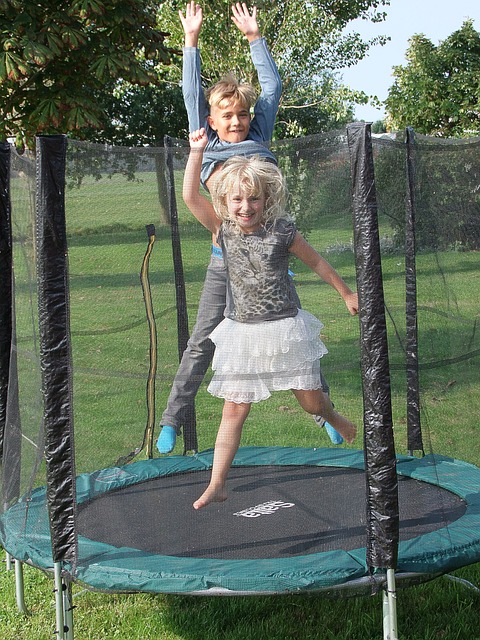 Of course, I made my dad and mom put it together the minute we got home. It took a lot longer than I thought it would, but once all the legs and springs were put in place as well as the netting, there was no stopping me. I jumped and jumped and jumped until I couldn’t jump anymore.

Every day of that summer, either friends, family, or neighbors came over to jump on my trampoline. The one thing they all loved about it was the shape; square. For my next birthday, we managed to get all of my cousins onto the trampoline. With all twelve of us playing popcorn on the trampoline, we were able to jump higher and longer than we thought possible. I remember as my youngest cousin, Olivia, entered into the enclosed trampoline.


She made her way into the middle of her hands and knees, having to stop at times to keep herself from flying into the air. My older cousins, Buster and Hannah, thought this was the perfect chance for a good game of popcorn. Attempting to bounce poor little Olivia into the sky, they powerfully jumped up and down causing her body to look like a doll being tossed into the air. When it was over, Olivia looked up with a smile and shouted “Again!” We all laughed out of relief.

I put on my snow boots and hat and rushed out the door. Once I was on the trampoline, I realized this was not going to be an easy job for an eight-year-old. With the netting around the trampoline, I had to push the snow out of the small door in the front. The trampoline bounced up and down making the job that much harder. By the time I had pushed all of the snow out through the tiny opening, sweat was dripping down my face. I continued to do this every time it snowed, protecting my trampoline from the harsh environments of Ohio.

Twelve years later, it is 2017 and my precious square trampoline looks as good as it did the day we bought it. We took the netting down around the sides in 2015, as it no longer seemed necessary. Although I do not jump on my trampoline as much as I used to, I still use it quite a bit.

My father and I constantly wonder how my trampoline has stayed in such great condition over all these harsh winters. Although the netting has a few tiny holes in it, each woven fabric holds firm to the next. As I lay on my trampoline, now nineteen years old, I look up to the clouds and stars and think about my life. This trampoline provided me so much joy and happiness as a child, and now as an adult, it brings me a peace and serenity that are hard to come by. When I need to be alone, the trampoline is where I go. My trampoline and I have developed a friendship that I hope endures for years to come. Who knows, maybe my own children will jump on it one day.

I'm a workaholic and think about my works and projects even while I sleep.
Latest Posts